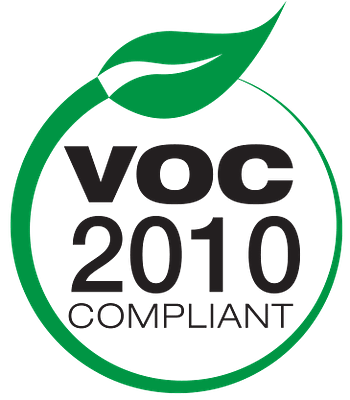 What does VOC stand for?

VOC stands for Volatile Organic Compounds. They are solvents found in solvent-based varnishes, finishes, sealants, and paints. The solvents dissolve and become released into the air. Once they’re released, these man-made compounds are absorbed into the atmosphere. Because they are volatile compounds, they are can harm the atmosphere and have a negative effect on the environment as a whole. Inhaling these compounds can also cause harm to your health. Many of these compounds are known carcinogens, meaning they can cause cancer.

In response to this, the government created standards to regulate these compounds. If a product meets these standards, it is labeled as VOC 2010 compliant.

The VOC 2010 act was passed in 2010 as an effort to prevent more of these compounds from being released into the atmosphere. This act covers anthropogenic VOCs, or man made VOCs. The VOC 2010 act prevents companies and manufacturers from selling products with high amounts of VOCs to the public commercially.

What are the standards for VOC 2010 compliance?

In order for a product to become VOC 2010 compliant, it can’t release more than the maximum amount of compounds into the environment. Products being tested for VOC compliance must release the lowest possible level of toxins for their product. This means less toxins in the air and less for you to breathe in. With lower amounts of VOCs being released, the product becomes safer for everyone to use.

Why is this certification important?

By adhering to VOC 2010 standards, we can prove that our engineered hardwood flooring is safe for the environment as well as for your home. PurezaWood won’t release harmful volatile organic compounds into the air, so you can enjoy your floors without worry.